What It Is: A memory game that targets prepositions by Zorten. 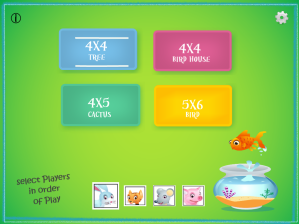 How It Works: The app is a simple memory game with four scenarios. It offers various levels of difficulty with options for more or less cards (4×4, 5×6, etc.). The user chooses the players (up to four) as well as the scenario. Once you’ve chosen these, you are prompted to pick the target prepositions from a list of 16. They are then randomly placed in traditional memory game format and the game can begin. The cards will have pictures and text and voice (the latter two of which are optional) that show things like “the monkey is under the banana” and “the dog is in the window.” 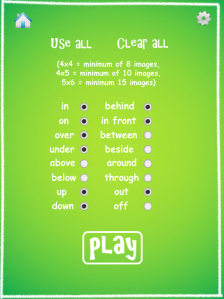 Therapy Applications: Initially, I was disappointed by this app, because it went too fast and it said the prepositions instead of letting me talk about them with the kids. I was worried it was just a memory game and didn’t allow enough time to work on prepositions in between and during turns. Once I played around with the settings option a little, though, the app became much more beneficial in therapy. For example, the app was set to automatically flip the cards back over after a match had or hadn’t been made. However, I wanted plenty of time to talk about the different cards with my preschoolers, so changing the setting to “tap to flip” was better because I controlled when we went to a new match. I kept the sounds on (they love that auditory reinforcement) but turned the voice off, because I wanted the kids to independently produce the correct prepositions pictured. I usually kept the card text on, but for elementary children it might be best to turn off the text if you don’t want them to have that extra clue. I would strongly suggest playing with the settings before implementing this app in therapy. After I changed the settings, it was much easier to use the app. I usually used it with one child, but it could be used it small groups, too. Sometimes we would play with siblings or caregivers to incorporate turn-taking skills and add some motivational competition. It is relatively easy to provide different levels of prompting in the app depending on your client’s needs (e.g. some children would independently produce the correct prepositions while others I would prompt with “is it (over/under) the bowl?”). This app works well for prepositions at the phrase level.

2. Settings options. They allow the therapist to control the app’s prompts.

5. Option for more than one player.

Cons: 1. No data collection. (The app does keep score of points for the memory purpose of the app, but not data can be collected within the app about the children’s preposition use.)

2. If you accidentally close out of the app, the game is not saved and will need to be restarted.

3. I worry that it’s not very functional. I think it can be great for more drill-based therapy when initially trying to teach the concept of prepositions to children, but it’s not “real life.”

The Take-Away: This app is good for making preposition drill therapy less boring. It can be used successfully at the phrase/sentence level. It isn’t terribly functional and has some minor problems, but I would recommend it while recognizing its limitations.

My Questions for You: Do you target prepositions in therapy? What age group would you use this app with? Do you have ideas for making it more functional?

Looking for expert reviews of this app? Check it out on YappGuru.com!