What It Is: A bug-drawing app by zinc Roe. 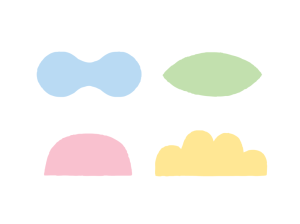 How It Works: The user picks the bug’s shape (out of four options), then can color it. After coloring it, the user touches a smiley face at the top. The shape is then shown in a bubble, which the user must touch/poke/pinch. (Truth be told…I’m not really sure what this bubbly party is supposed to represent.) After a few seconds of this, the shape grows legs and antennas and eyes and whatnot and is finished. The user can then take a picture of it and/or go back to create a new bug. 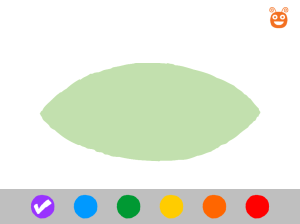 Therapy Applications: I bought this after I found Create a Car, and I was kind of expecting it to be along the same lines. Unfortunately, it didn’t provide nearly as many speech/language opportunities. Usually I just used this app as a reinforcer for my younger kids (two- and three-year-olds). With artic/phono kids, I snuck in some work on fronting and final consonant deletion (think: bug, go, big, color, red)–there weren’t a TON of opportunities here, but it is still possible to get in some work on these things while using the app as a reinforcer. The app can also be used for basic direction-following and vocabulary-building skills (think: “put two red dots next to the green dot” type thing). Overall, however, I think the app best serves it’s purpose as a simple reinforcer. 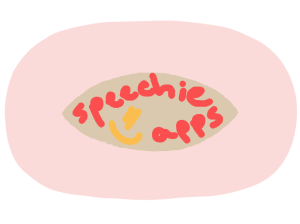 Pros: 1. Voice instructions. This helps increase ease of use, as a voice guides the user through each step.

2. Great spin on the usual drawing reinforcers. Younger kids especially enjoy having the therapist help them write their names (or their siblings’, teachers’, or therapists’ names!) on the bugs.

Cons: 1. I felt as though the app could have included so much more than it did. For example, instead of automatically filling in the legs/antennas/eyes for the user, it would be nice for the user to pick those things to be able to put on the bug. In addition, it would be cool to be able to save the creations under the children’s names and to be able to label each bug. 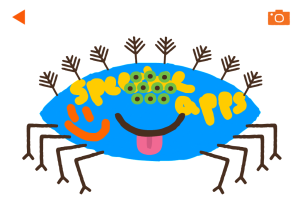 2. There is very limited interaction in this app. For example, you can’t do anything with the bug after it’s completed (e.g. move it around), and it doesn’t respond in any way (e.g. wiggle) to touch.

3. The app can be somewhat confusing. Although the voice directions lead you through the steps, it’s hard to explain to children what is happening. This is particularly true during the step where the shape is in the bubble. Maybe I’m missing something there, but I can’t figure out what is happening at that part!

The Take-Away: This app is just “okay”. It works well as a reinforcer and fun spin on drawing for the very young crowd (late EI/early preK); however, it is lacking in so many areas. For the low price, I don’t feel bad about the purchase, but I do wish the developers had included more.

My Questions for You: Do you use this app? Think it’s worth the $.99 purchase? Any ideas for other speech/language goals that can be addressed?

Looking for more expert reviews of this app? Check it out on YappGuru.com!