Another app that Android users can download, too! I’ve gotten a few great suggestions for Android apps, but if any readers have any more, comment below or email me. I’m always open to more ideas for using with adults or children!

What It Is: Minigames set within an interactive scene by TribePlay.

Interactive Scene–scroll around to discover different animals and games.

How It Works: The app opens as an interactive scene that you can scroll and touch to hear animals make noises, see flowers move, spin the windmill, etc. (In this way, it’s quite similar to the Farmyard! set-up.) Hidden within this scene, there are ten games to play. They can be selected individually but will automatically go in rotation once they have been started. After each game is completed accurately, the user earns an animal of their choice as a reward to add to their zoo collection, which can be played with at the end. 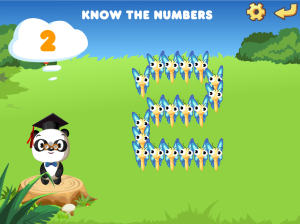 Know the Numbers–goes up to 20.

Counting/Know the Numbers. Here Dr. Panda counts aloud “with” the user as the numbers are shown on the screen.

Animal Puzzle. Fit together the pieces of a puzzle to create an animal.

Big and Small. This asks the user to identify the biggest animal.

Find the Different One. Pick out the different animal.

Know the Colors. Dr. Panda will ask questions like, “Which one is green?” while the user picks from a line-up.

Match the Animal/Shadow Shape Match. Match an animal to its shadow.

Hide and Seek. Chicks quickly peek out from under baskets then hide again. The user needs to touch the correct baskets.

Learn to Count. Touch the animals while Dr. Panda counts.

Therapy Applications: I really like the interactive scene for eliciting language. It’s also great for working on basic concepts, cause/effect, labeling, etc. See my Farmyard! post for some more ideas, since the interactive scenes in these two apps can be used similarly. As for the games, some are more useful in therapy than others. You can work on rote speech with the counting games (depending on the child’s abilities, you may need to turn off the sound for this). The puzzles can be good for nonverbal reasoning skills (though I admit I prefer physical puzzles for this). Find the Different One, Match the Card, and Match the Animal can be used to talk about same/different and the concept of “what does not belong.” Remember the Cards and Hide and Seek can be used for memory. Games like Know the Colors is great for working on receptive language.

2. Ease of use. I really like the set-up of the interactive scene (which is it’s own fun in itself) with the games embedded throughout. The app is quite easy to navigate.

5. Visual and auditory stimuli are presented together instead of just having one or the other. This is really important for learning those early skills.

6. The user gets “rewards” when they complete activities correctly–animals to put in their “zoo.” Kids love this.

9. Settings. You can turn on/off certain games so they are or aren’t included in the rotation.

Cons: 1. Unfortunately, there are usually only 2-3 trials for each of these games during each time playing. This means that playing each of them goes by super quick, there isn’t enough repetition to truly learn the skills, and the difficulty level is not varied enough. It would be nice to be able to change the settings to have more trials at once.

2. While the app seems to be spot-on with targeting some skills (e.g. memory), it doesn’t appropriately address others. For example, the counting games remind me of the “interactive” television shows where a character reads the numbers “with” the kid, but in reality the kid is sitting back passively watching the character just read them. Of course, modeling can be good, but I think the app really should have incorporated something to get the child to interact and either receptively or expressively count. As is, it doesn’t appear to be very functional or effective.

3. It would be nice to be able to interact with the zoo animals the child earns during the game. As of now, they are simply moved to a field where they can be “recycled” if desired.

The Take-Away: In a gist, these are some cute, fun games for a roughly 2-6 age range (depending on which minigame is being used). The app definitely serves some speech/language/cognitive purposes but would likely be more useful as an app that parents could play with their children at home. My biggest disappointment was that so few trials were involved during each individual game. I think there is quite a bit to the app, but since you can’t control the settings in regards to the number of trials in and difficulty of each game, it detracts from the quality. Overall, I think it could be useful for some clinicians but is not currently a “must-have”.

My Questions for You: Would you use this app in therapy or recommend it to a parent? What goals/objectives could be addressed while using it? Do you have any suggestions for the developers?

Disclosure: TribePlay provided me with a free copy of this app to review. I was not compensated in any way for the review, and they were aware that I would be discussing the app’s strengths and weaknesses.