I’ve been neglecting you Android users lately, so I wanted to share a little love and tell you about a relatively new app that works on both Android and Apple operating systems! It’s also one of the few kids’ apps available on Google Play to measure up to what is available on iOS, in my oh-so-humble opinion. 🙂

What It Is: An app for growing fruits and veggies in an interactive garden by TribePlay.

How It Works: If you’ve used any of the Toca Boca apps, such as Toca House, you’ll notice some similarities in their function and appearance. When you enter the app, you’re in front of Dr. Panda’s place, where he is waiting with a wheelbarrow. Various animals in various vehicles (e.g. monkey in a car) pull up one at a time and thought bubble pops up above them with the type of produce they would like. Tapping the thought bubble brings you to the task. The app then takes you through various tasks of garden maintenance: shoveling, planting, watering, picking, etc. It also has fun “extras” within some of these tasks, such as cleaning up the tool shed and squishing bugs. After the task is completed, you bring the produce back to the animal that requested it and do another one! 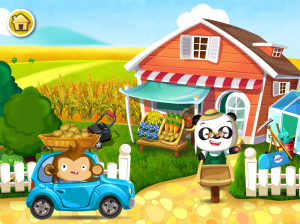 Monkey is happy with his produce!

Therapy Applications: My favorite ways to use this app is for cognitive goals. You can certainly use it for a variety of other goals, like wh-questions and prepositions and vocabulary, but I think it is most fun when addressing cognitive objectives like planning/sequencing, short-term memory, reasoning, and problem solving. For example, throughout a task, you can ask questions like, “What fruit are we trying to grow here?” and “What animal asked for these raspberries?” to promote memory. There are also plenty of reasoning and problem-solving opportunities, such as discussing why indoor potted plants might need to be rotated and how we are going to keep rodents out of our garden. Planning and sequencing are integral parts of this app, as the child has to figure out what to do next and plan out the steps of how to do it. Oh, and I often throw in a little incidental theory of mind teaching in the beginning when the thought bubble comes up, with questions like, “What do you think he’s thinking about asking Dr. Panda?”

2. Versatility. I mostly focused on the cognitive objectives you can, but since the app was simply designed for play, it can be used for most anything.

3. It’s not always immediately clear what the next step is. Yes, this is a pro! The first time I played with the app (by myself), I was actually put off by this. However, when I used it with kiddos, I realized how valuable it was for them to have to figure this out without blatant visual prompts.

4. Visual rewards. These include clapping, sunshine, and confetti after the completion of each major task.

5. The app features healthy food. This might seem silly to point out, but many kids’ apps out there feature some less-than-nutritional options. It’s refreshing to see natural foods being celebrated, too.

Cons: 1. The app requires you to grow the fruit/vegetable it picks. It would be cool to have some sort of interactive scene where you could choose which fruits/vegetables to grow at that time.

The Take-Away: This app is a great addition to your app toolbox, whether iOS or Android. I would definitely recommend it for preschool through early elementary, or any clients with whom you’ve successfully used Toca Boca apps.

My Questions for You: What goals would you address with this app? What age range do you use it with?

Looking for more expert reviews of this app? Check it out on YappGuru.com!

Disclosure: TribePlay provided me with a free copy of this app to review. I was not compensated in any way for the review, and they were aware that I would be discussing the app’s strengths and weaknesses.